The term cosplay or Kosupure was first coined by Nobuyuki Takahashi around 1984 in some magazines after returning from the Los Angeles Science Fiction World con (Rahman, 2012, p. 318). The Uow Cosplay society has been operating for a much shorter time. First created back in 2015 by Emily Coleman operating under the Video Game Association at the time with about 5 to 8 members, the Cosplay Society later became an actual club in 2017 and now has around 20 to 30 active members and around 365 members of our club group page on Facebook. We have hosted countless events and even won UNILIFE’s ‘New Club of the Year’ award at the Uniclub’s awards.

My Digital artefact started to showcase my club in a documentary to break stereotypes. This changed over the time to something I am much more satisfied with, My DA has become a series of adverts I will be releasing over the next years plus keeping up on creating eye-catching and welcoming events for new members. 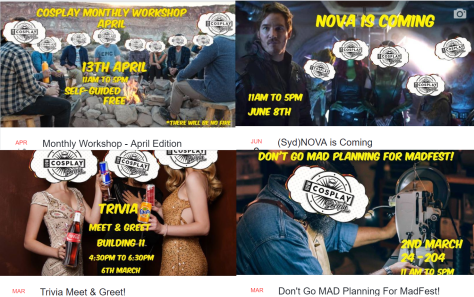 I have already made an advert for our location photoshoots which are new this year. My aim is to make these advertisements short and sweet, the first one sitting at around 1:30 minutes one of the comments on my beta suggested condensing the adverts to around 30 seconds, which would have been unrealistic on this one. Its eye-catching, using our noticeable yellow colour and presenting it under the UOW Cosplay Societies page helps make it look like more of a promotion than someone random promoting the club , also these videos will be pinned to the top of our Facebook group like one of the commenters suggested along with all being shown as O-week to represent our club.

Looking into the future the location photoshoot advert is paving the way for many more to come, I don’t want them to be too spammy to the page though otherwise, no one will see them. To name a few, as well as the timelines that will go with them, are:

As the Secretary my job is to book rooms for the club, sometime last year before our current social media coordinator I also started to put events up along with eye-catching backgrounds for new people so they didn’t have to open the event up to see the details.

“Almost every waking moment is either directly or indirectly spent with media. Yet when asked about it, people tend to forget most of their media use, mainly because they are concurrently exposed to multiple media at the same time” (Deuze, 2016) These act almost like Internet Banners for the society. I aim to make them fun usually using our signature yellow along with funny backgrounds or names that include puns based off the convention they are featured around.

Fast: I have experience with video and photo editing before.

Simple: I’m an admin/moderator of the group page so I’m able to post as the club page.

Tiny: I was already previously doing one of these things, creating the background images for the events, now I’ve just added on the videos.

The first video advert was decently successful, around 23 people reacted to it on Facebook, right now our club doesn’t use IGTV, but it might be an interesting future endeavour. It will be interesting to continue and hopefully pass on next year since I will be leaving and will not longer be able to be Secretary.