The content of this post is a summary of the three peer reviews of DA pitches for BCM325 – Future Cultures at UOW. As part of BCM325, we are required to comment on three other student’s DA pitches to show engagement with other students. We are then to self-reflect on going through this process.

Summary:  The concept behind The Little Fellas is to boost the exposure of online presences via cross-promotion. The DA will many be practised on Twitter and YouTube where Bennett will promote other channels to his audience with an agreed arrangement of the other channel to do the same. 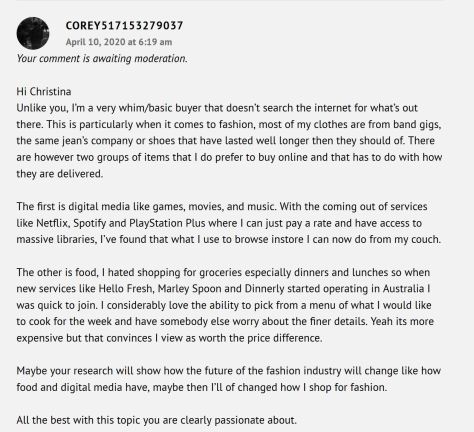 Pitch: “The Response To: …” by Aysha Morrison

Summary: This student’s DA is a look into the increasing issues concerning fake news. The concept pitched is a series of video essays that explore the way in which fake news has changed how information was reported on about large events in recent news.

Giving critical feedback on a peer’s conceptual idea of a project is extremely hard, while I could purpose about things they haven’t thought of or expressed or could have done differently in a 2-minute pitch. It would be better practice via a group constructive brainstorming medium with multiple peers at once prior to the pitch than a commentary after an official pitch in my opinion but with the current situation with COVID-19 we have to make do.

Looking at Bennett “The Little Fellas” I understood what the idea of his project was but I also thought of things that I personally thought were illogical with it. if his promoting another channel on his but repurposing his channel to do so, what are the cross-promoters going to promote? A channel that’s purpose is to be promoting others? And maybe that just didn’t come across in the pitch or I just didn’t get it. When commenting on the pitch I was reminded about a very successful case of cross-promotion #TeamTrees and thought of showing Bennett about it for his research. The pitch did help me with marketing a little and I feel more comfortable with marketing like The Little Fellas as a consumer than say FB looking at all the metadata on me than using targeted ads to annoy me.

The Fashion Forecast was the hardest pitch to give feedback on, maybe cause I’m from a different generation to most the class or the fact that fashion and online shopping are things I just really don’t care about. I struggled to give useful feedback, I did write about my experiences with online shopping with different industry to fashion and how a change in the fashion industry could affect my habits as a consumer. But looking at the future of the fashion industry and consumer spending habits are of little interest to me so my engagement with this DA was forced and not enthusiastic.

Aysha’s The Response To: the pitch was probably the DA I enjoyed listening to and engaging with the most out of the three. The reason for this mainly was because I’m a big fan of the topic and it’s effects on the past and what it will do in the future, I instantly knew what I wanted to express in my engagement and will most likely continue to engage with this DA as the subject progresses.

All in all, engaging with other student’s ideas was a helpful experience for not only my own DA but for my understanding of how others look at Future Cultures BCM325 and what they are looking to get out of it. I do wish that this engagement was done as more and editorial meeting or brainstorming activity rather than an analysis after the fact one. Because as it is with an official pitch stating the methodology, I have high doubt that any of these comments will drastically change how another student progresses with their DA.