Live tweeting is a skill I am yet to master, but one that I will hopefully get the hang of as the weeks go on. The whole atmosphere of this skill has changed from week 1 to where we are now due to social isolation and this subject being moved online. Being able to connect with my peers through the #BCM325 hashtag and watching this continuously trend each week on Twitter is such a cool thing to watch. Not only are students engaging but other people are able to as well.

Being week 1, I had no idea what I was in for. So far, this has been the most challenging week for me live tweeting. Not only had I never live tweeted but I had also never seen Metropolis. For this week I tried to tweet as much as I could. My tweet with the most engagement that week really didn’t have much to do with the film itself, but I thought it was funny non the less. 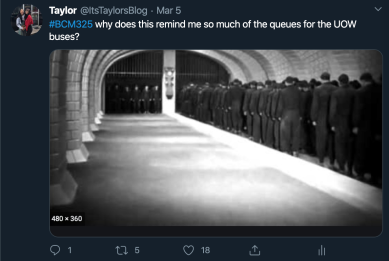 Other tweets/interactions this week included:

Being in class surrounded by other people who honestly, had no idea what was going on (just like me) made the first experience that much more fun.  My tweets this week were kind of all over the place.

Yet again another movie that I had not seen and I found quite weird.. but cool all at the same time. I found this film hard to watch and honestly I had no interest in it. Is it too harsh to say it was painful to fit through. This was reflected in my tweet density. 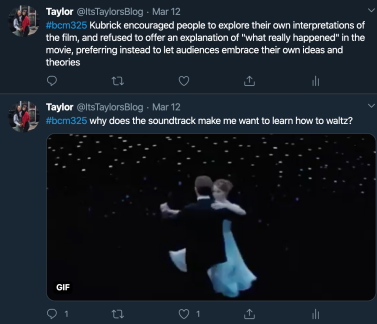 I certainly didn’t do 10 tweets during this movie as every time I stopped to look up information or tweet, I missed something and then had no idea what was going on. Which then took me a while to catch up. Being week 2 I was still trying to find my rhythm between looking up facts/ information and paying attention to a movie that I had never seen before. Most of my tweets this week were in the form of favouriting other peers tweets and trying to understand the film through their point of view.

Why do we keep watching films I haven’t seen, am I uncultured or something?

This film was interesting. The whole concept of human like robots at a exclusive theme park. I did previously attempt to watch the tv show years ago, I didn’t last too long. 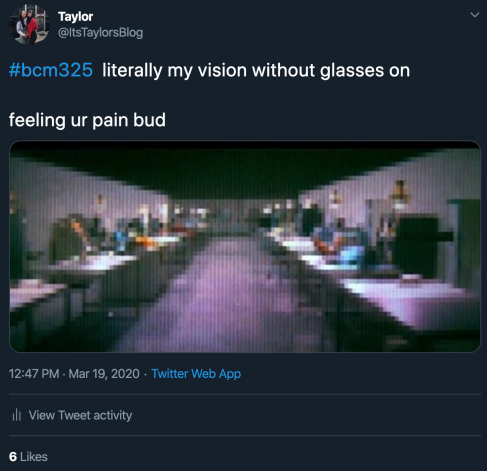 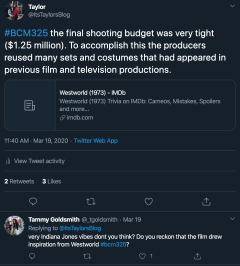 Again I found this movie hard to follow at times. I think this is because science fiction has never been a genre that I’ve chosen to watch, more of a comedy girl.
My tweets this week were more content based and gained some interaction,(especially compared to last week). Again, since I found this movie hard to follow in points I did reply heavily on my peers to help me gain an understanding of what was going on.

This was the first movie we all had to watch individually due to social isolation. Was quite odd to be sitting at home in my pjays watching a movie for Uni!! Besides this everyone was there live tweeting as per usual. Only hiccup I had was after the movie, going onto Discord (on safari). The sound wasn’t working, I kept getting every occasional word. So I reset my laptop, still nothing, reset the browser, nothing. Eventually gave up so hopefully this week it’ll all work!

This movie was not too bad and therefore found myself engaging with it more. Definitely hit the tweet limit this week. It was a movie that I have heard people talk about, but just like the others have never seen it myself. 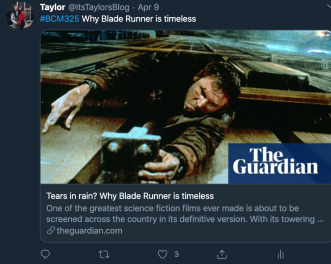 I found that by posting my thoughts on aspects happening throughout the film encouraged my peers to interact with my tweets more.

This weeks movie was meant to be Johnny Mnemonic but instead we ended up watching Minority Report. This has been the best one we have had to watch so far. There was just something so interesting about it. I found tweeting this week good because I was genuinely interested in the film. My tweets this week were more content based, which I found my peers connected with more. This week I also decided to put up a poll regarding one of the key themes seen throughout Minority Report. This might be a new approach that I take each week as I enjoyed learning about my peers opinions.

I also mentioned that last week I had some issues with Discord working with safari, this week I used Google Chrome and everything worked perfectly.

Each week we are provided with online lectures that encourage us to think deeper about the concepts/ themes and imagery that we are seeing each week in these films. Upon looking back at the subject outline, this is an aspect that my tweets are missing and will need to be intergratged from now on.

Overall I am struggling with looking up things happening in the movie, during these movies (and I’ll say it again, I have not seen one of these movies before). I have found that I get most of my tweets in at the beginning of the films, as usually the endings require attention! From now on I will need to come to class with some background research already done, therefore I will be one step ahead. This method will definitely help me further identity key themes and concepts and be able to draw ideas from lectures as well. Hopefully my next tweet curation will reflect this! I am throughly enjoying learning a new skill even if it is taking me a while to get use to it, as they say practice makes perfect!