Live tweeting in #BCM325 has assisted me in developing beneficial skills. These skills including reporting an event, critically evaluating texts and media, and even note taking in a meeting or lecture set up, will translate to other aspects of my professional life.

Reflecting on this round of live tweeting, I had a higher level of engagement across all areas including; the tweets, retweets, comments and discussions. As the weeks progressed, I learned new techniques of how to engage more thoroughly with both content and my peers.

Were genuine attempts at engaging in discussion with my peers regarding the ‘memory’ theme. I believe that if I had conducted further research and linked it in my comments, I would have been able to respond to @maihdang in more relevant way.

The next two screenings were much more successful, due to the research undertaken prior to the screening. This enabled discussions with my peers, as seen below with Maude. I had hoped for additional participation in this discussion, but some tweets can be easily overlooked in the screenings. To maximise likelihood of engagement, I decided to use the #BCM325 more extensively so they can be more prominent on the hashtag thread. 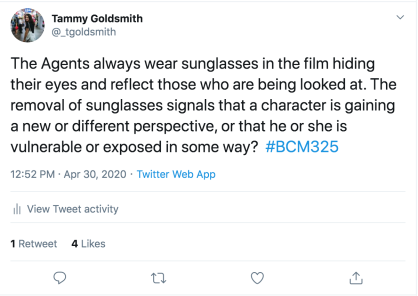 I implemented these decisions in subsequent weeks as shown in the screening of Robot and Frank. I was well prepared for tweeting due to the research of the film as well as the research I had been conducting for my DA. I used this knowledge and engaged in a discussion with @jessmcvicar and @imogen_44, whereby I linked academic sources used in my blog

Despite participating in this discussion, I do not believe I used my knowledge to the best of my ability. In the future, I planned to integrate materials more comprehensively in my comments rather than just posting links.

In preparation for the screening of Blade Runner 2049, I researched and prepared my tweets prior due to the complexity and length of the film. After examining my tweets, I believe they were contextualised, engaging and orientated around the lecture materials. I engaged in some discussions, although I hoped to receive more engagement from my peers as the tweets provided were examined clearly with relevant sources attached.

By including quotes in my tweets, I was able to give insight about cyberpunk themes and ideas seen in the film. Unfortunately, it was not commented on by my peers but was reacted to. Although I engaged in an informative discussion about cyberpunk later in the film.

Looking back at the tweets, it would have been more beneficial to include the link to the reddit thread that was shared earlier in the screening or retweeted @_mikaylastott’s tweet with a link to the thread.

I made great strides in making improvements during this round of live tweeting which was emphasised in the next two screenings. This was due to the research undertaken prior, the inclusion of images and relevant sources in my tweets. 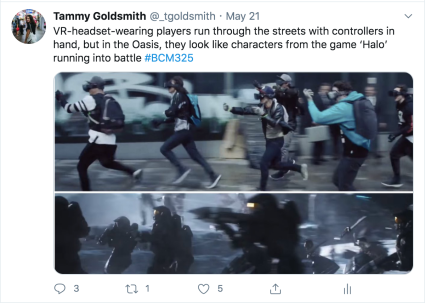 Looking back, I believe tweet 2 could have been engaged with more and a discussion could have occurred if I had quoted from the article used or further highlighted the specific future cultures trope that the link/content is related to.

The week 11 screening of ‘Alita: Battle Angel’ proved to be some of my most interacted with tweets due to the adoption of feedback and development of skills.

This tweet was inspired from the lecture, specifically after looking at Chethan Kumars ‘Artificial Intelligence: Definition, Types, Examples, Technologies’. It was also one of my most responsive tweets, provoking discussion with my peers and furthermore being retweeted by both @angusVEVO and @CL_Moore.

I endeavoured to relate more relevant materials within my engagements, coupled with #BCM325 to reduce them being overlooked by my peers. This proved to work effectively as seen in my conversation with @jasmyneconnell and @gracegoll. 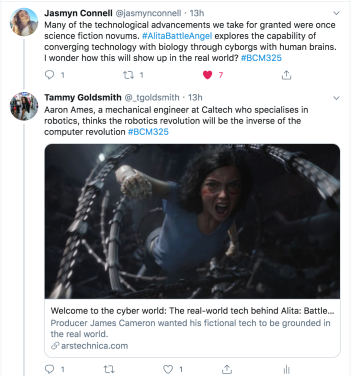 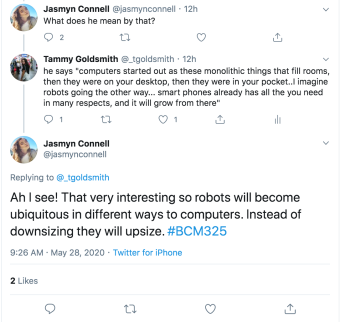 Through the adoption of this technique, I was able to achieve a higher amount of engagement. Analysing the development of my comments I believe they have improved the most due to my awareness of what I need to improve on each week and how it will be demonstrated.

In the final screening of BCM325, we watched the Australian documentary 2040. The film was refreshingly optimistic with an underlying dystopian tone. My tweet proved relevant due to the large number of high rises and apartments being constructed. I believe this last week of tweeting proved to encapsulate the techniques I have learnt throughout the semester.

Overall, my experiences during BCM325 have been nothing but amazing. Safe to say I’ve found a new favourite film genre.

The Future is Now.