I think the generation I was born in is one of the last to know what it’s like to have a childhood without a phone in our hands and apps for anything and everything. During my primary school years, I would only ever use our household computer to print off information for homework research tasks. Nowadays, kids are mastering iPads before they even start pre-school.

I stumbled across this video at the start of the semester and it kickstarted a whole train of thought of outmoded technologies. I was so dumbfounded while watching this video- a majority of the kids didn’t even know how to turn on the computer! Do most people own laptops these days? I just didn’t understand the initial confusion. Don’t PCs still have to be turned on that way? Even though this video is about an operating system, I couldn’t help but think about the devices…

Computerisation, automation and interconnected networks have allowed for certain social conditions and convictions to arise. Such social constructs help form an ambiguous ‘cyberculture,’ associated with automation and assembly. Economics and cultural assumptions of capitalism, that of a ‘postcapitalist’ society and ultimately religion lie within the centre of arguments relative to robotics (Wohlsen, M. 2014).

Mercedes-Benz demonstrates the integration of automation and human resources through introduction of ‘robot farming’ (Gibbs, S. 2016).  However, the language used by Benz delivers the assumption that this is a present consideration until technology overcomes that of human capital. Santini (2016) builds upon this illustrating that robotics will eventually outpace human development. Demonstrating an attitude towards human capacity decreasing to the point of mass unemployment.

Such rhetoric and expression of fear associated with employment and automation can be considered unwarranted, with Wells (2014) attributing through automation our socio-economic principles may change to the point of universal basic income, a form social security in which unconditional income is received on individual basis (BIEN, 2015). Additionally the relationship between religious credence and automation, employment and ultimately intelligent AI can be related to the display of societal fear. To illustrate such the segment of Shinto faith that is Animism, illustrates the belief that all entities, even those constructed by humans have a spiritual essence. Idolatry, the creation of life through assuming the position of a ‘false god,’ in Western religion is considered sinful (Mims, C. 2010). Thus the negative associations of automation in the West can correlate to that of humanity as creators, and contrast to that of Asian doctrine holding spiritual significance to that of robotics.

Automatonophobia is the fear of anything that falsely represents having sentience, the autonomy to act out of human control. Typical humans, afraid of what they can’t control or manipulate.

A common theme of cyberculture, and a running trope in media & film, is the fear and demonisation of robots. More so are we fearing the robots, but what they are capable of, and will be capable of the farther technology advances. It’s seen time and time again, from Ultron to Ava, that we create these fictional stories of doomed robots and their flawed understanding of humanity (a reflection on our own humanity they tell us), will ultimately doom us.

Robotics have come a long way in a very short amount of time, and companies like Hanson Robotics have their eyes firmly set on creating lifelike, animatronic-androids designed solely for human interaction. To be more human than human. Sophia, is the real-life Ava of Ex Machina. Creator Dr David Hanson’s goal is to make robots “as conscious, creative and capable as any human” and eventually, to one day “be indistinguishable from humans”. He envisions a world of robots not dehumanising us, but reminding us of our humanity.

But more on that later, essentially, I wish to say, robots are not evil. They are not Ultron because they were programmed by Tony Stark’s (our) flaws and faults. They do not become Ava because their intelligence is so far more superior that it uses our own humanity against us. They are what we make them to be. Cyberculture, society, or whoever, needs something to fear that we think is threatening what makes us human.

What I will be talking about instead, is the path of robotics or humanbotics and where its heading. Starting with the history of robots and how we came to fear them, I wish to track through media the villain label we have come to attach to robots and offer a more friendlier take on robots and us. How many innocent robots have succumbed to human hands in films and television? How do the news and internet react to the human like animatronics? Do we really even need to fear the power of robots? Will they actually take over the world?

Nobody puts Robot in the corner.

For my research project, I am interested in looking at the complex layers of cyberculture and refugees. I’ll be looking at how refugees participate in cybercultures, ranging from recording abuse in detention centres to using Google Maps to make their way through Europe and tracking their journey through social media. 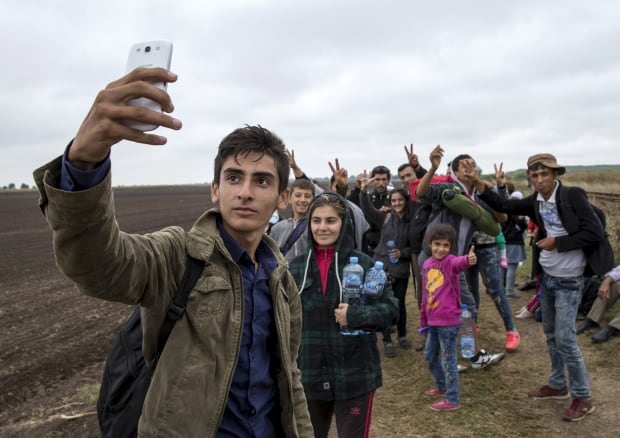 “Alvand, 18, from Syria takes a selfie with his friends as they walk along a railway track after crossing into Hungary from the border with Serbia last week. Cellphones are widely available in Syria for relatively little money. (Marko Djurica/Reuters)”

I will also be extending my research to how countries are using technologies to monitor and control the movement of refugees. The current crisis has lead to many radical discussions and actions towards ‘monitoring’ refugees. This extends to the EU maritime agency using drones to monitor refugee boats and…

Children’s gaming is a fast-paced and growing industry that aims to do more than just entertain. Educational games are created to help children build necessary skills beyond the classroom environment. While there are many that argue that these games are harmful to education there are those that believe this technology is allowing children to develop and learn more than ever before.

For the research project I will be aiming to investigate educational games and the role of digital technology in children’s digital culture. This includes the growth and development of these games, as well as the effects on children and education.

This year I am also completing DIGC310, where I will be creating a pitch for the development of an educational game for children, which aims to teach children about health and nutrition. This pitch will be the case study for my research and I will be integrating the research I do…

Data. It seems like such a simple concept. However in the 21st century with the immense proliferation of social media and the continual advancement in technology, this four-letter word has become much more complex and essential to our everyday lives.

We live in a time where information (data) is often translated from words, into zeros and dashes (binary data) and then back to words, but a staggering 65% of the world are visual learners. Images are processed much more efficiently than text at a speed of 13 milliseconds, compared to the 250 milliseconds taken to process text.

Neuroscientist agree that text simply can’t do what images can do, visual stimulus amplifies any message by accelerating communication, increasing comprehension, improving retention and stimulating a greater emotional responses.

Data journalistDavid McCandless states that by “visualising information it turns it into an info map to follow. Data visualisation therefor combines…

Last year, Chattr recorded and released a video series called “Uni Life Savers”, where we aimed to interview students around campus about topics regarding the university lifestyle. As well as just recording and editing a short video series, we also did extensive research into media platforms to release onto, advertising through Facebook and did some serious statistical research. We also experimented with looks for the show, and using different equipment to create a different feel…

Since my fascination of the cyberpunk genre began in high school I have been constantly drawn to the stories because of the imaginative, yet almost realistic “imaginaries” of the genre. From the total mental virtual reality device in Sword-Art online to the Bladerunner Voight-Kampff test scanner, these devices have constantly intrigued me.

Because of this, for my digital artefact, I have begun

developing the idea of a website that catalogues and explores these types of Cyber-Mythologies and objects. The aim of this site is to portray and explore not only specific cyberpunk creations but to also delve deeper into the history and societal fears and concerns over such items.

In order for my site to be effective, it is obvious I must conduct deep research into the Cyberpunk genre and its surrounding culture. This will include films, books, anime series and literature surrounding these texts which will provide helpful and…

My original broad concept for my research project was to look into the ways in which Cyberculture might be seen to reflect aspects of oral cultures. I would examine specific case studies from Cyberspace, such as fanfiction, let’s plays, and forum threads in order to discuss where this digital space interaction does or does not take the shape of some new iteration of orality. Building from this idea that that there’s a legacy of the past in the present, I’d like to focus on the performance of tragedies online and the ways in which they recall Aristotle’s ancient oral/performed tragedian forms and structures.

According to Aristotle’s Poetics: “Tragedy is an imitation of an action that is admirable, complete and possesses magnitude […] effecting through pity and fear the purification of such emotions”, this ‘purification’ referring to a cathartic release of emotion through empathy. His definition requires the technical elements…

Robots, Androids and Cyborgs have long been the talking point among scientists, it may well be the pinnacle of what mankind can achieve. My interest in Androids first started whilst playing Fallout 3. A post apocalyptic action RPG developed by Bethesda.  What seemed as fantasy once upon a time is now becoming all too real.  From killer robots threatening the human race in I,Robot (2004) to the sentient , compassionate kind in Bicentennial Man (1999) we have dreamed of what may become of our race in the near future. Are these games and films giving us hints to what is in store for us? One thing is certain though,  how much of a machine is a machine that wants its own freedom?

The Replicated Man is a side quest that can be obtained throughout the game . You are tasked by a Dr Zimmer , who works for a group called…